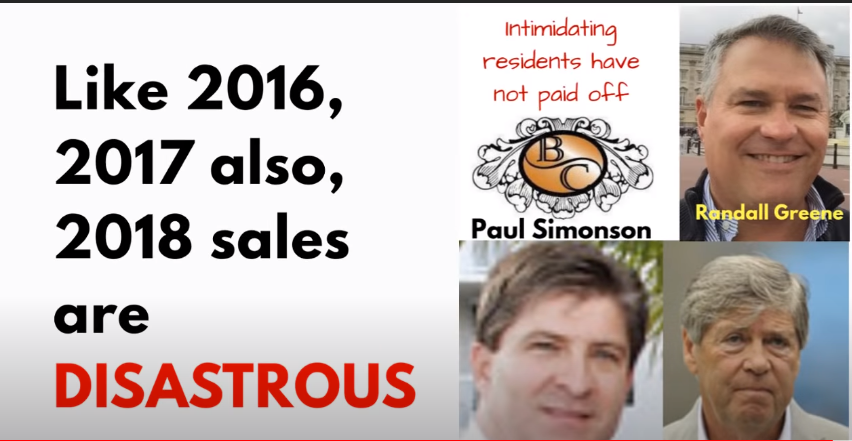 Bella Collina has been described numerous times in the last 17 years as a “GHOST TOWN,” including in the recent ABC investigative news report. 2018 sales figures, confirms resident Don Karl Juravin, that Bella Collina is “JINXED with BAD LUCK”.

Despite Dwight Schar and Paul Simonson’s great efforts and investment in the last 6 years, potential buyers seem to bypass the salesmanship and have relied on facts: 17 years of dark history and questionable management.

Dwight Schar, a billionaire, and part-owner of the NFL Redskins, used his fortune against homeowners. Together with Paul E. Simonson, they engaged in massive legal litigation against 500 families, in what many felt where unfair fees, and so he “took” their properties. To some degree, this method continues today with Schar’s people controlling the HOA so real homeowners do not really have a say in what is going on in this community.

Furthermore, accusations of retaliation against families, women and kids continue.

With almost 900 lots in Bella Collina only 60 to 70 homes are estimated to be fully occupied by families that can call Bella Collina “home” and are not affiliated with Dwight Schar, in some manner. That is, an estimated 5% to 7% occupancy by “real unaffiliated families” year round. Dwight Schar’s representative, Randall Greene, was overheard telling attorney Brad Saxton that Bella Collina has 150 homes and 50 are “in the making.” The reality is about 50% of that: the last count showed only 82 built houses (not necessarily occupied) and only about 10 houses being built.

The Bella Collina community, under Dwight Schar’s ownership and involvement, has already been involved in about 500 lawsuits. Many of these 500 residents abandoned and fled Bella Collina.  A federal class action accused Dwight Schar with FRAUD, RACKETEERING and unfair practices in Bella Collina. Randall F. Greene himself was accused in court of “stealing” a house in Bella Collina in a real estate fraudulent transaction.

The Club at Bella Collina is actually a… Wedding Venue

The Club at Bella Collina is beautiful its main function is for weddings and other commercial functions: not really as a club for the residents. At times it’s even noisy and feels like a “party” rather than “home”. During the frequent events, all guests are utilizing the Club with no screening. Obviously, guests of the wedding are there to have good time which includes drinking. Residents of Bella Collina have no choice but to share the Club with these non-resident partiers.

The Club at Bella Collina has a “show” of membership acceptance.

Based on Zillow, buyers don’t really see the value and shy away from Bella Collina because of its troubled history.

While the rest of Florida seems to boom, Dwight Schar, Paul Simonson and Bella Collina’s numbers are very gloomy:

● ZERO value for the land/lot in home purchase

Bella Collina #DwightSchar Paul Simonson were involved in 500+ lawsuits against families who fled Bella Collina Florida leaving it as a GHOST TOWN with only 5% to maybe 8% real family occupancy after 17 years!

Don Karl Juravin (#DonJuravin) decided to expose Bella Collina and protect homeowners. In return, Dwight Schar the billionaire (owner of Bella Collina and the Washington Redskins) retaliates against not only me but my business and mainly my WIFE and KIDS.