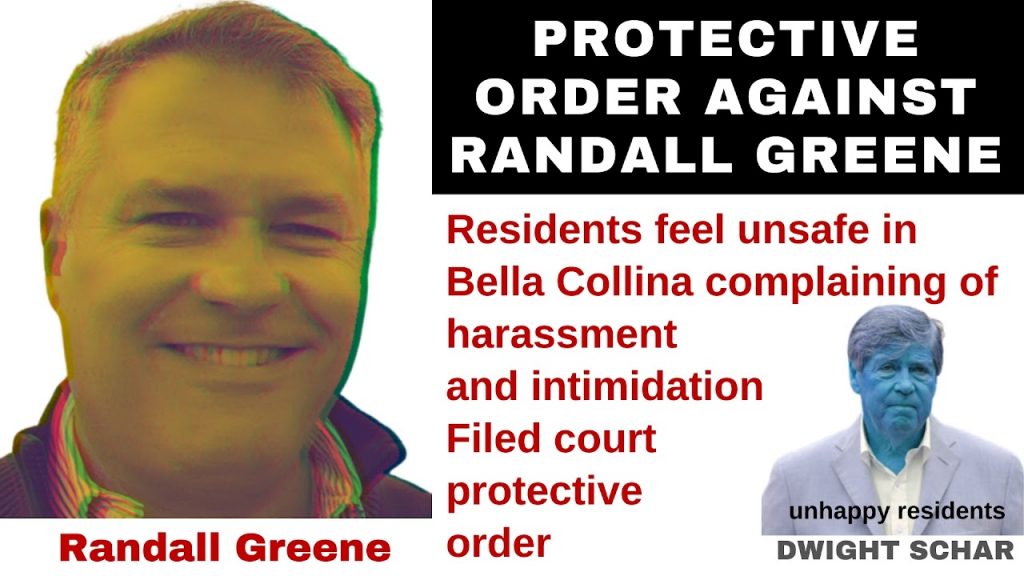 Randall F Greene had controversially (some claim illegally) taken over the Bella Collina Property Owners Association (POA) for Dwight Schar. Mr. Schar is the owner of DCS Capital Investments and the founder of NVR Inc (NYSE: NVR). Dwight Schar’s businesses have been under congressional investigation as many homeowners feel scammed and ask to revoke Dwight Schar‘s company licenses.

According to Don Juravin, he holds Randall Greene as the responsible party for the well being of Bella Collina residents, directly and indirectly, as the POA president. Therefore, any harassment or intimidation, breaking, or violating privacy is Randall Greene’s responsibility.

Don Juravin, an entrepreneur who tries to help people protect themselves against fraud and scams, became one of Randall Greene’s targets. Lately, Randall F Greene has been targeting women and kids as well. In a court injunction, Florida Case No:  35.2017-DR-001326-AXXX-XX, he requested that Randall Greene be ordered to stop stalking and harassing his family, wife, and three daughters, as well as himself.

In the injunction for protection against stalking, Don Juravin explained that Randall Greene (directly or indirectly) had “resorted to terrorizing Petitioner and his family.” The petition also detailed the “numerous harassing text messages to Petitioner,” as well as Greene’s “online, defamatory ‘smear campaign’ aimed at Petitioner.” In addition, Greene was accused of using “the security force of Petitioner’s subdivision to harass and intimidate him, and has either directly participated in, or ordered others to vandalize Petitioner’s property.”

The court petition also stated that Greene may possess several unregistered phones, known as burners. Greene was also accused of destroying physical property belonging to Don Juravin and his family in the injunction.

ABC News and investigative journalist Steve Barrett investigated harassment and intimidation claimed against Bella Collina and its POA chairman Randall Greene. A video interview with Don Juravin revealed that wires had been cut and vandalism had been done to the family’s home in retaliation for the complaints made about how the community was run.

“We have a lot of money and credibility, and those are two things you don’t have, with anyone,” said Randall Greene to Don Juravin over a text message implying that Don Juravin should give up since the billionaire Dwight Schar has “lots of money” regardless of justice. Mr. Juravin served in the Israeli army and assisted the US troops stationed in Europe and he doesn’t seem like he’s going to give up to “Goliath” Dwight Schar.

Meanwhile, other residents formed a class action lawsuit and accused Randall Greene and Dwight Schar of embezzling conspiracy, and racketeering. In that lawsuit, attorney Tim McCullough mentioned that more than 400 lawsuits had been filed in Bella Collina against residents by the POA. Tim McCullough was accused of falsifying a client’s signature and losing the case for his clients and consequently, attorney Tim McCullough has a terrible web reputation and a Florida Bar complaint.

Previously, before all of this happened, Randall Greene was accused by residents of stealing a house. Randall Greene had taken over a house that was purchased by someone hired to buy a house for Jordan and Maya Rupert. Judge Mark Hill ordered Randall Greene and Christina Greene to “vacate the premises” and clean up the house:

“The transfer of the Pendio Property from Alfresco to DCS is a fraudulent transfer in violation of Fla. Stat.§ 726.105.

The transfer of the Pendio Property from DCS to Randall Greene and Christina Greene is a fraudulent transfer in violation of Fla. Stat. § 726.105.”

The judgment against Christina and Randall Greene.

According to Don Juravin, despite almost 18 years of aggressive sales attempts, Bella Collina continues to be a ghost town with less than 10% true family occupancy. Residents complain that Bella Collina in Florida is not a luxury and that many homeowners left unhappy only after a short period of time. That would not be terrible if the neighborhood was only beginning. But Bella Collina has been around for 18 years (the community was started in 2002). Similarly, we found an article showing Siena Bella Collina sales to be very slow.

We also found that Randall Greene also brags about his involvement in the now-defunct business Catalfumo Construction. The business was brought in court for stashing away $64 million illegally instead of paying its debts in 2012. Randall Greene was the Vice President of Finances and by his own testimony in court was in charge of handling the company’s finances and acquisitions.

In Randall Greene’s Twitter bio, he claims that he works for Disney and Marriott and one may be led to believe that he is a well-known manager in Disney or Marriott companies. However, we contacted both of these companies and received no response.

The article is based on information collected on the web including opinions and personal experience of Don Juravin and other Bella Collina residents as well as the court injunction filed against Randall F Greene (motion which was denied leaving the residents with the same feeling of fear.)