"Extremely disappointed and irritated with this company. Have had this for just about 2 months. 1st doorbell installed from the Safe Streets did not work and kept freezing. Called the tech **** and had him out I the Ring doorbell. Still had trouble with it. 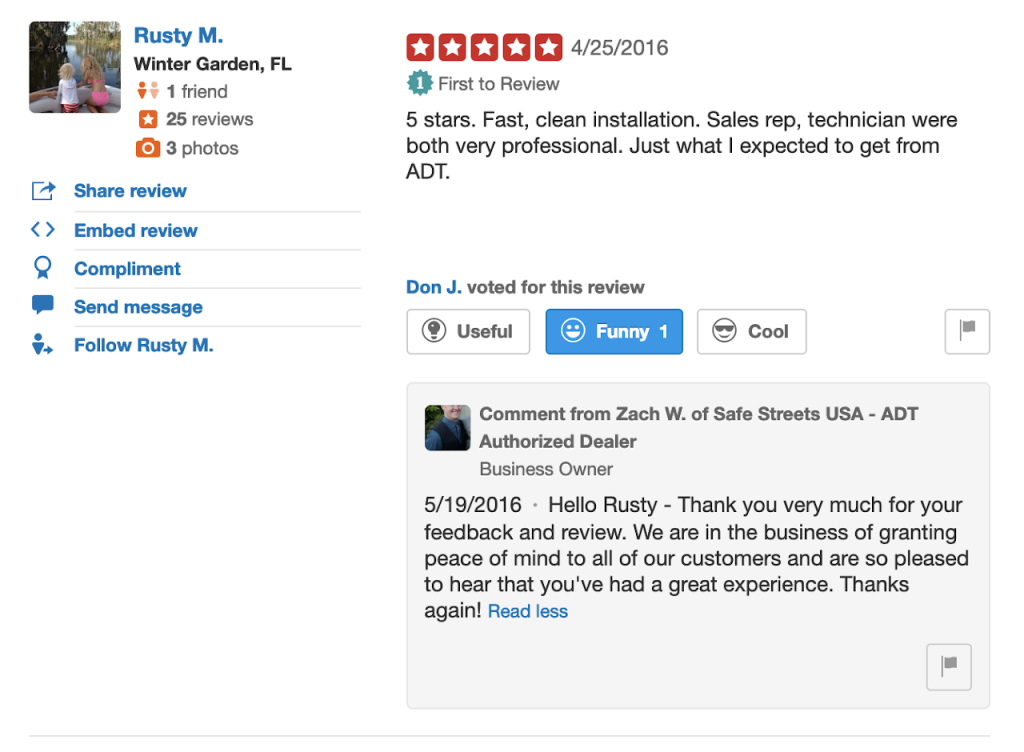 “Extremely disappointed and irritated with this company. Have had this for just about 2 months. 1st doorbell installed from the Safe Streets did not work and kept freezing. Called the tech **** and had him out I the Ring doorbell. Still had trouble with it. Made several attempt to contact him and company to get help. Have been waiting a month and was told we have to give 3 service calls to cancel. I told her we have had the tech out that often and now he wont come out and cannot be reached. They refused to cancel our contract because the tech did not not the service calls and insist we have to have a service call through company or it doesn’t count. Do not use this company. We still want out and hope to have some resolution. We cannot have ADT help because Safe Streets is an authorized dealer but not part of ADT”

Bait & Switch! the sales rep over the phone took my credit card info for the initial $100 down, and scheduled an appointment for a month out for the install. I get an email to sign an agreement for the upcoming installation, only to see her name was completely different on the agreement. So I called her and asked why her name was different and she said because “nobody in the office can pronounce her name correctly” yeah… right. So before signing the online agreement, I decided to search online about this SafeStreets company and low and behold they are crooks. So i called them back and told them to cancel my agreement, cancel installation date, and to refund my money, I was then harassed by a manager, and he was doing his best to bully me into the contract, telling me his sales rep is a single mother and that she will lose thousands of dollars by me not going forward with the 3 year contract and installation. I kept demanding he refund my money, and he just said “youll get it” but I’m still waiting on my refund. I now have to wait 15 days for the bank to give me the refund, then I need to cancel my debit card so they dont pull any more out. The sales rep was told me her name was ****** **********, but then her named changed when I went to sign the online agreement to ***** ******, when I asked her, she said names were her name. Her office number was ************ *****. The rude manager that was harassing me said his name was **** ******. I asked him who his manager was, and he said he was the manager. After yelling at him he told me his immediate manager was ***** ****** ************** *****, but I have a feeling this was just a ploy and another con. I look forward to being refunded the $100 by my bank, and cancelling my debit card thereafter. SHADY BUSINESS INDEED!

I hired my ADT system throw this company because they offered a $100 Visa card, I submitted all they requested and waited and waited and never got the Visa card, I called many times and didn’t get no were, last call I made they said I had to prove that I mailed my information when the instructions never stated to mail using certified mail or FedEx to get a tracking number. They can’t prove I didn’t mail it and my hours spent trying to get this Visa card had been worth more than the card it self. Once my contact expires they will lose my business, I hope the Visa card is worth losing customers. I’ll make sure to leave this review in other websites.

If there were an option to give this company a zero That will definitely be my rating, STAY AWAY from them, again STAY AWAY. I had closed in my house and was excited and wanted to provide my family with the best security system so I decided to go with ADT however not really understanding the whole third-party authorized dealers I had a sales agent knock on my door from Safestreet named *****. ( me thinking he is from ADT corporate) I live in ********* so anyone that lives in this area and is looking for a security system be aware!!! DO NOT sign with Safe street. I have only been with them for less than two weeks and I’ve had to call for system repairs, the technician never installed my ring correctly which had no battery and I had to be without a system an entire overnight mind you I paid 1000 in equipment and additional 3000 for 36 months. The technician threw away the charging cable because he assumed we didn’t need it. My panel turns off in the middle of the night, it shows not armed but the alarm goes off. WTH? I call CS and they said that they can’t do anything since I already signed a contract , I am not satisfied with them and they will not terminated my contract for something that is their fault. They will not help you !!!! Safestreet does not care about their customers all they want is a quick commission/ sale and don’t really care about their reputation or the safety of their customers. I hope thus review will help others to NOT go with this company! Would love to get a representative from Safestreet contact me and see what they have to say.

I believe we got taken advantage of by one of your Area Managers ***** ******. We had ****** Security and had close to 2 years left with them. He was a smooth talker and said he was trying to build up his business and said “no problem I will pay it off. He did not put it in writing. I told him that 2 years would be a lot and he just kept pushing this system truly was not giving up. We have called him several times about this money owed to ****** $917.23 and he was either to busy or forgot now he won’t even return our phone calls. We are in our 70’s and absolutely think we got conned. I am now getting letters from a debt collector. In our entire life we have never had that happen. We certainly would not have dropped ****** for your system without ***** persistence. Is there anything you can do? My husband is so made he wants to take the system out completely but I know that’s not possible. ***** *

I signed up with Safe Streets after getting a flyer upon moving. The flyer promised your $100 sign up fee back within 30 days. Not only have I still not received that (its been 12 WEEKS) I also had a really hard time getting an outdoor camera that I wanted to purchase. After 3 attempted appointments to get it installed, the tech was always “out” of the camera, or something else came up. The tech finally quit responding to me at all. I was informed he just “quit the company due to drugs” or something. Makes me feel really good that he was in my house many times. I regret the decision to sign up with this company. I should not have to call and beg for my rebate when it was promised to me. I also still do not have an outdoor camera 12 weeks later. The check has been “mailed to me” the last 3 weeks, but yet it never reaches my house. I would sign up directly though *** and not use Safe Streets

My Mother is 92 and suffers from dementia and Alzheimers. She signed a two year monitoring contract and did not know what she was signing. I have called three times (August 21, 24, and 30th). I have repeatedly asked to speak to a supervisor. When I am transferred to someone, based on my request, it turns out they are not a supervisor. The supervisor is “not available.” Conning my mother into a contract when she has dementia/Alzheimers is elder abuse. I have stepped in to take over my mother’s finances and find their customer service is non-responsive and their practices predatory. Stay away from this company.