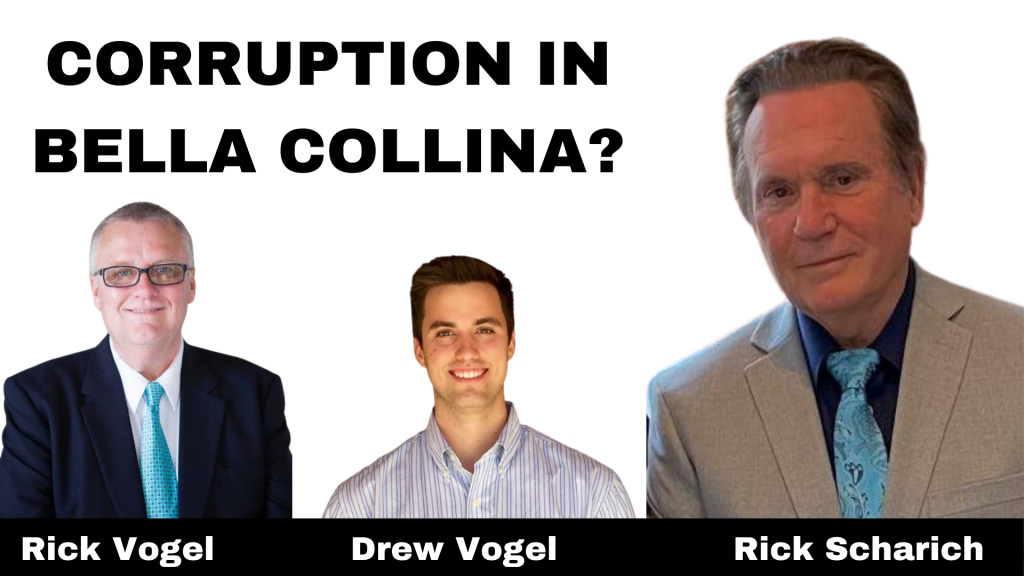 UPDATE: In a counter lawsuit filed against PSR Developers, which is owned by Rick Scharich and Paul LeBreux, it’s alleged that the two were involved in a possible real estate scam. The alleged scam, which potentially can be an illegal real estate fraud, Rick Scharich was colluding to help Dwight Schar “steal” a house from a family which was exposing the wrongdoings by Dwight Schar’s controlled Bella Collina community.

The lawsuit reads: “Plaintiffs by their wrongful conduct have violated the Florida Deceptive and Unfair Trade Practices Act.” The reader of the Lake county court Florida 352021CA000227A, may perceive developer and lender Rick Scharich and Paul LeBreux as real estate scammers who possibly committed a fraud by negotiating with Dwight Schar’s team ways to take away the house in unethical methods.

Rick Scharich, who is the VP for Vogel Building Group (Drew Vogel and Rick Vogel), is accused of violating the Fourteenth Amendment by attempting to take the property without just compensation.

Mr. Scharich has about 30 lots in the troubled Bella Collina community and it’s believed that his violations of the HOA rules is done knowingly by Paul Simonson. Then Rick Scharich is buying a overpriced lots from Paul Simonson father in law. Bribes in Dwight Schar’s Bella Collina? Stealing or inflating prices in Bella Collina? Sources tell us that the matter will be deposed and exposed during court proceedings.

Rick Scharich is said to collude with Dwight Schar who was recently banned from the NFL for unethical conduct after he was accused of GANGSTER and EXTORTION behavior by his partner Dan Snyder. Eventually Dwight Schar was found “guilty”, was banned for life from NFL ownership and was fined an estimated $33 million dollars plus $7 million in legal fees. The defendants in this case are set to depose former Attorney General of The US, Loretta Lynch, Dan Snyder and Dwight Schar himself.

Paul LeBreux is an attorney from Canada accused of what seems to be misconduct of finance in the case of self shooting of a business partner. Paul LeBreux, partner of Kim CG Moody, is also accused of abusive conduct to women & kids in Dwight Schar’s Bella Collina.

“Paul LeBreux functioned as a rubber stamp board member in Dwight Schar’s troubled community called Bella Collina in central Florida. Anna Juravin, who claims to have been abused by Paul LeBreux’s conduct on the board, which has affected also her daughters, is preparing a lawsuit of $18 million against Paul LeBreux personally. She has a long list of abusive misconduct which she holds Paul LeBreux responsible for. Anna Juravin believers want a grand jury to hear what she has been through, it will bring them to tears and she will be awarded a much larger punitive damages amount then $18 million.”

Richard Arrighi, who used to be a partner of Dwight Schar, reveals HOA misconduct and alleged corruption in management of Paul Simonson, Dwight Schar’s CPA. Paul Simonson, along with Alec Simonson, his son, are rumored to have stolen property from houses in Bella Collina and possibly using them at home or selling them on the web. No response was given by Paul SImonson or Alec Simonson who is now a student at the Department of Biology at the Florida Atlantic University.

Did Rich Scharich Use Son Trevor Scharich Or Wife Venessa Scharich Against The Family Which He Tries To Harm?

Rick Scharich is Ricky Lee Scharich  married to Vanessa Scharich who is expected to be deposed in case 352021CA000227A along with Trevor Scharich. The Bella Collina saga was already documented by channel 9 (see below).