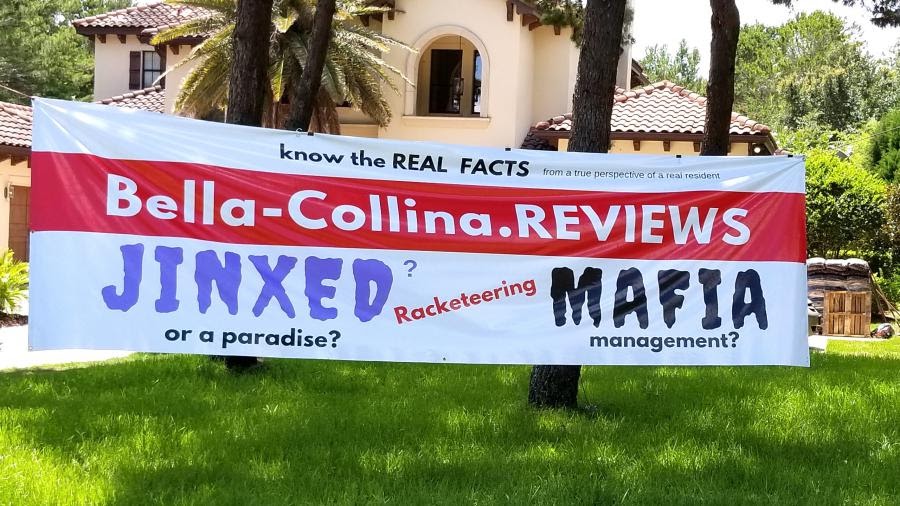 Juravin seems to fight for everything he believes is right. He does it without compromise, utilizing his own time and money for the benefit of others. He frequently reminds his legal team: Non sibi, sed patriae (not for self, but for country), which also happens to be the motto of the U.S. Navy.

According to Juravin, in 2015, he and his family were lured by Stockworth Realty to buy a house in the Bella Collina development, located near Orlando. The Stockworth agent made what turned out to be a deceptive presentation, and did not reveal the dark history of Bella Collina, which included more than 400 lawsuits, and accusations of the use of “mafia tactics” by Bella Collina management, through Randall Greene, an agent of the developer. Instead, he was assured that this was a once in a lifetime opportunity and that the community was “very reputable.”

During 2016, the Juravin family learned that the Bella Collina Country Club is little more than a noisy venue for weddings and business events, rather than a luxury country club for the Bella Collina residents. Juravin learned that facilities that are not routinely part of these events are allowed to fall into disrepair. For example, the club’s pool is found to be cold, dirty, and deserted. The “club” is actually a sales office, not community oriented, and the family of a 7-year-old girl was asked to pay thousands of dollars for a birthday party.

In contrast to the club’s glossy, highly-advertised wedding venue, Juravin found the Bella Collina residential area to be neglected and uncared for. His family experienced Bella Collina as “trashy”, with workers’ cars parked everywhere, construction debris scattered throughout the property, and the entire development poorly managed.

Caring deeply about the community he calls home, Mr. Juravin approached Bella Collina management and offered practical solutions. These included improved lighting at the entrance to the “ghost town” development, and replacing an old, dangerous security call box that shocked anyone who used it. When Bella Collina’s management showed no interest in making even minor necessary improvements over the course of a year, Juravin took action to finally get the management’s attention: he wrote an insider Google review, with supporting pictures and documentation, of the “trashy” side of Bella Collina.

Shortly after voicing his concerns, Mr. Juravin and his family became the victims of “mafia tactics”: the family’s visitors were harassed at the security gate, fixtures in the backyard of their home were mysteriously broken, and the pump equipment that operated their pool was vandalized. Harassing text messages soon followed from “burner” mobile phones, from area codes all across the country.

Randall Greene, who was accused in court of stealing a house through a fraudulent real estate transaction, manages Bella Collina. Greene is involved with Dwight Schar, a billionaire real estate developer and part owner of the Washington Redskins. Schar is perceived by Juravin, as well as others in the community, as the head shot-caller in Bella Collina, while Randall Greene is his henchman.

And Juravin was not alone. Similar horror stories of retaliation against other residents who dared to stand up for their rights soon made their way to the Juravin family.

In a classic tale of David and Goliath, Juravin strived to make the public aware of the bad experiences shared by Bella Collina residents and lot owners. Dwight Schar, with the aid of Randall Greene and an army of lawyers, sought to silence Juravin by petitioning for a court order.

At a recent hearing that took place in Lake County Circuit Court in front of judge Richard Singletary, Bella Collina retreated from its previous request for a complete “gag order” that would prohibit Juravin from voicing any negative opinions about Bella Collina. Instead, Bella Collina now asks the Court to prevent Juravin from using phrases such as “mafia tactics” in connection with Bella Collina, as well as the use of hashtags identifying those with whom Bella Collina and Schar have business connections (such as #NickFaldo, #LeeJanzen #Marriott, and #Disney) which Mr. Juravin uses to inform them about what is happening in this community.

Juravin states that his win in court is a victory for all community residents who are fed up with bad community management. He believes that Judge Singletary will understand that granting Bella Collina’s request would infringe on Mr. Juravin’s rights under the First Amendment.