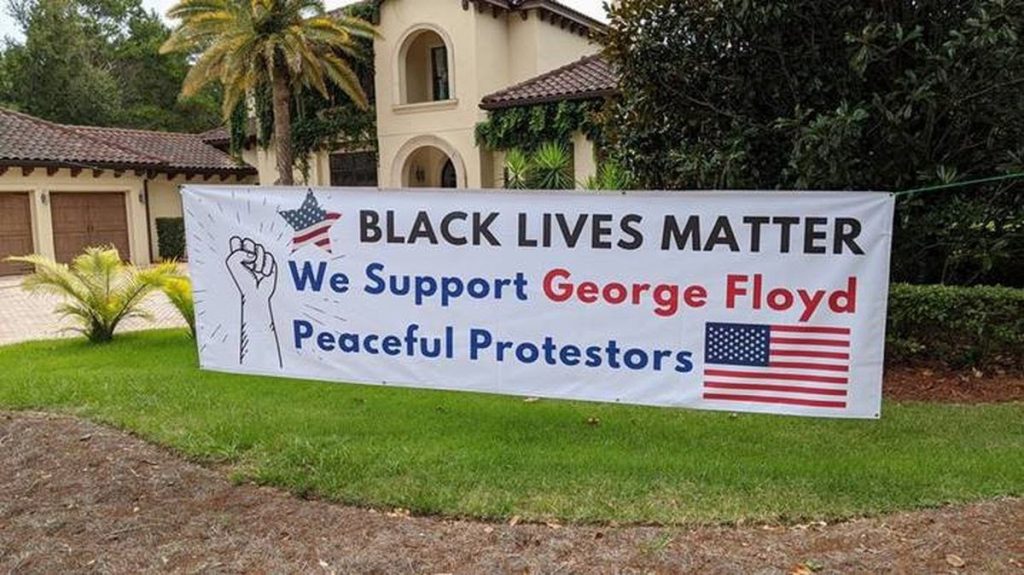 Don Karl Juravin on Friday planted the 13-foot-by-4-foot sign, in support of “peaceful protesters” and mistreatment of African Americans, in the front yard of his $1.7 million home near Montverde in south Lake.

But he was notified this week by a Lake County court that he might be in violation of an injunction forbidding him from putting up any yard sign without permission from the property owners association. That order stems from a lawsuit in which he alleged the development used a “terroristic, mafia-style campaign” to bully and silence him.

“It’s not the message,” said Randall Greene, CEO of RG Developments/Bella Collina Partners, of the Black Lives Matter sign. “We agree with the message.”

But Juravin said he didn’t think anyone would complain about the sign that reads, “Black Lives Matter We Support George Floyd Peaceful Protestors.”

It features a raised fist and an American flag.

Greene said Juravin has a contentious history with the community with the two sides trading lawsuits and barbs against one another.

In 2017, the property owners association asked a judge to order Juravin to stop posting “scurrilous” messages on lawn signs or a vehicle he parked at model homes.

The association’s rules forbid yard signs, though Juravin has insisted they were selectively enforced.

He had posted negative reviews about Bella Collina on a website, calling it a “ghost town” and a “failed community” and accusing developers of dealing in bad faith.

The judge’s order forbade Juravin from putting up signs without prior association approval.

Greene said the association may have given Juravin permission to fly the Black Lives Matter message if he had asked — but he didn’t.

Juravin said the association shouldn’t have tattled to the court if it truly supports the message. He also said he may sue to keep it on display.

According to a court filing Monday, attorney Patrick Howell, representing the property association, alleged Juravin’s actions were “willful and contemptuous …”

It asks that Juravin and his wife, Anna, be held in contempt, be ordered to pay legal fees and costs, and remove the sign.

He said he doesn’t plan to remove it.

Many owners purchased lakeview lots, sometimes for $1 million, from original developer Bobby Ginn just before the real-estate market cratered in 2007. After the crash, DCS Investment Holdings bought the golf club and other Bella Collina property for about $10 million in 2012, taking charge of the association and its mounting debt from unpaid association fees.

Some owners accumulated debt of more than $100,000 on vacant home sites.